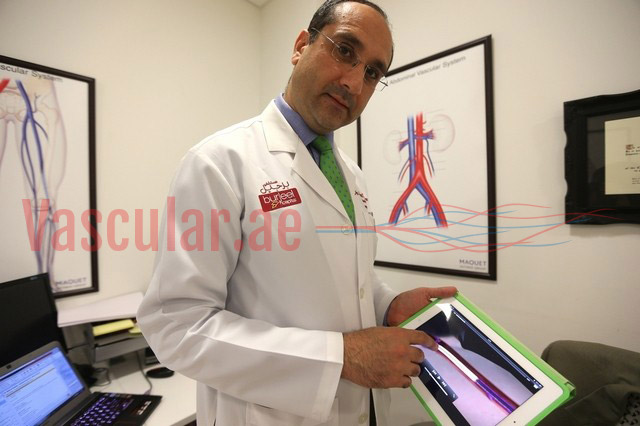 Residents of the UAE are vulnerable to a potentially fatal condition because they do not take it seriously and know disturbingly little about it.

Deep-vein thrombosis, or DVT, occurs when a clot develops in a vein. In some cases it can detach and travel to the lungs, causing a pulmonary embolism that can kill.

By far the most cases will lead to damage to the deep veins, which can lead to ulceration.

According to Dr Amit Kumar, vascular surgeon at Mediclinic City Hospital in Dubai and Burjeel Hospital in Abu Dhabi, DVT was not taken seriously because it did not pose an immediate threat to life.

“My sense, based on the last five years that I have been here, is that vascular disease awareness is really, really low because it is not something that will kill you immediately, like a heart attack,”.

“If it’s something you can live with people say, ‘why do I have to get it fixed?’ Those who have it are unaware that this thing can really kill them.”

Dr Mohammed Baguneid, chief of vascular surgery at Abu Dhabi’s Mafraq Hospital, stressed the importance of early treatment. He agreed there is little awareness of the condition in the UAE.

“Early treatment with anti-clotting medication can prevent a pulmonary embolism and reduce the chance of developing the long-term complications of leg ulcers,” Dr Baguneid said.

“From my experience here, there is a lack of awareness of DVT. However, when it’s explained, people do seem to be concerned by it but their compliance to medical therapy raises some concerns with me.”

DVT is most commonly linked to long-haul flights but can occur anywhere.

UAE residents are more likely to have the condition go undiagnosed compared with patients in other countries because they are not aware of the symptoms or risk factors, said Dr Kumar, who is also an assistant professor in surgery at Columbia University, New York.

Symptoms are swelling and a sharp pain in the leg, especially the calf. People over the age of 40 are at more risk.

“People will say, ‘it’s just a little bit of cramp, this, that or something else,’ and they will just keep walking around until they come back with a much worse swelling, or if the clot has moved from the leg and gone into the lungs,” said Dr Kumar.

Even when the condition has been diagnosed, some do not take it seriously enough.

“They are not compliant with the medication regimen that’s required,” Dr Kumar said. “They go on to develop new blood clots and increase the risk of having a pulmonary embolism.”

Risk factors for DVT include obesity, which is a major problem in the UAE, not moving for long periods and varicose veins, he said.

Dehydration and genetics can also contribute, as can smoking, contraceptive pills and past occurrences of the condition.

Signs of a pulmonary embolism may include chest pain, spitting out blood and painful breathing. Depending on the size of the clot, it can kill.

Dr Baguneid said that while only a small proportion of DVTs led to a life-threatening pulmonary embolism, by far the most will cause damage to the deep veins.

This ultimately led to a swollen leg with discolouration around the ankle, and could develop into ulceration, he said.

Based on Dr Baguneid’s experience, it is more common for people in the UAE to not realise they have had an old DVT, compared with those in the West.

“It’s not unusual to see patients with an old DVT, having had a swollen leg for many years,” he said.

“Any patient that develops a sudden swelling to one leg, particularly if it’s associated with pain, should see a doctor as soon as possible.”

People at risk have to be more aware on flights because of the limited mobility and dehydration.

They should hydrate well, move their ankles and walk around if possible, and use flight socks.

Every year, one in every 1,000 people in the UK is affected by DVT, according to the NHS Choices website.